skip to main | skip to sidebar

Maybe not the party
but still on the bus

Don't forget
the girl
still on the bus

Time to make something colorful!
Posted by JustBakin' at 2:41 PM 2 comments:

This one always gets me through....

We have to love one another
Support our sisters and brothers
Hold on tight
And hope we make it out alright
Posted by JustBakin' at 3:57 PM No comments:

Wake Up Album of Today 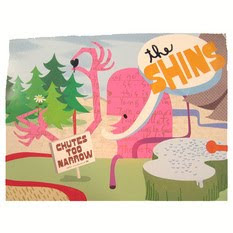 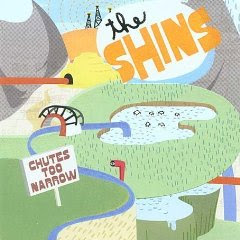 So I ran into an issue finding a pic for the album....I have this on vinyl (as usual) and the only pic I could find of my cover was of a poster...maybe I have a special release...I don't know. Anyway, my LP cover is the one with the pink guy on the front....not the gray rhino thing LOL.
So onto the music. This album has gotten me through MANY baking marathons, on vinyl and mp3! Just a great follow up album to their debut, "Oh, Inverted World". I have always been a lover of The Shins, but REALLY got the addiction after watching "Garden State", which was written, directed and starred Zach Braff....what a cutie LOL. Natalie Portman, also in "Garden State" is a self proclaimed lover of The Shins...pretty cool when Padme Amidala approves.
As a writer of poetry and prose The Shins inspire me to keep on keepin' on with my crazy thoughts...Check out some of their lyrics...such beautiful arrangement of words...in art there is postive and negative space...the rule of thirds etc. and I believe the same rules exist in the placement of words and the arrangement of lines in music...The Shins exlempify this.
I don't really want to choose favorite tracks from this album because I see the creation more as a whole....but....I will say this "Pink Bullets" is a song I have sang to my kids to put them to sleep and I have the undying urge to make Bob (hubby) play that guitar part for me repeatedly LOL. Check out the video for this song too...very awesome!
Pink Bullets
http://www.youtube.com/watch?v=3XBabozrPGA
another good chill...
Those To Come
http://www.youtube.com/watch?v=SVsX56BPrpU
Those To Come lyrics - Read them they are beautifully arranged :)
http://www.azlyrics.com/lyrics/shins/thosetocome.html
So thanks for sharing my wake up album with me today! I love music and I love vinyl! Please comment and share! Have a great day and let the music carry you!
Posted by JustBakin' at 8:01 AM 1 comment:

Wake Up Album of Today! 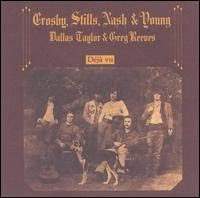 Crosby, Stills, Nash & Young - Deja vu (1970)
Oh how I love this album! And for so many reasons!
This is the first album release of Crosby, Stills and Nash with the addition of Neil Young.
CSN&Y are the result of a few seriously rockin' bands falling apart. The Byrds, The Hollies & Buffalo Springfield. Interestingly, the bassist on Deja Vu, Greg Reeves, was suggested by the infamous "SUPER FREAK" Rick James. Reeves didn't last long, and was replaced for "acting erratically", sounds right coming from a Rick James suggestion!
Jerry Garcia, best known for being viewed as the leader of The Grateful Dead, appears on "Teach Your Children" playing the pedal steel guitar.
John Sebastian, the founder of The Lovin' Spoonful, appears on the title track, "Deja vu" playing harmonica.
"Deja Vu" had a great time on the charts, in my opinion, it spent a week on top.It also ranked #14 of the top 100 albums of 1970. The "top hit singles" aren't necessarily my favorite tracks on the album, but have become momentous in American life. Songs like "Teach Your Children", "Our House" & Joni Mitchell's "Woodstock".
My personal favorites are "Carry on", "Helpless" & "Country Girl"...although I do love the album on it's entirety!
Carry On
http://www.youtube.com/watch?v=GWTz_lU5BY0
Helpless
http://www.youtube.com/watch?v=Yy_uSlnaTjM
So thanks for sharing my wake up album with me today! I love music and I love vinyl! Please comment and share! Have a great day and let the music carry you!
Posted by JustBakin' at 9:04 AM 1 comment:

May you stay forever young....

Okay so Sadie wanted to do POLKA DOTS today! So we have raisin dots, sandwhich dots, tic tac dots, cheerio dots, marshmallow and chocolate chip dots and pistachio and cranberry dots!
There are a ton of great muffin tins going on....go see http://michellesjournalcorner.blogspot.com/ !!!! 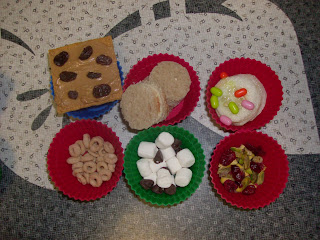 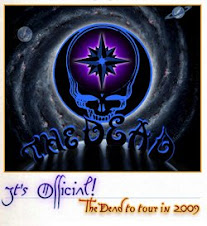